How are we organised? 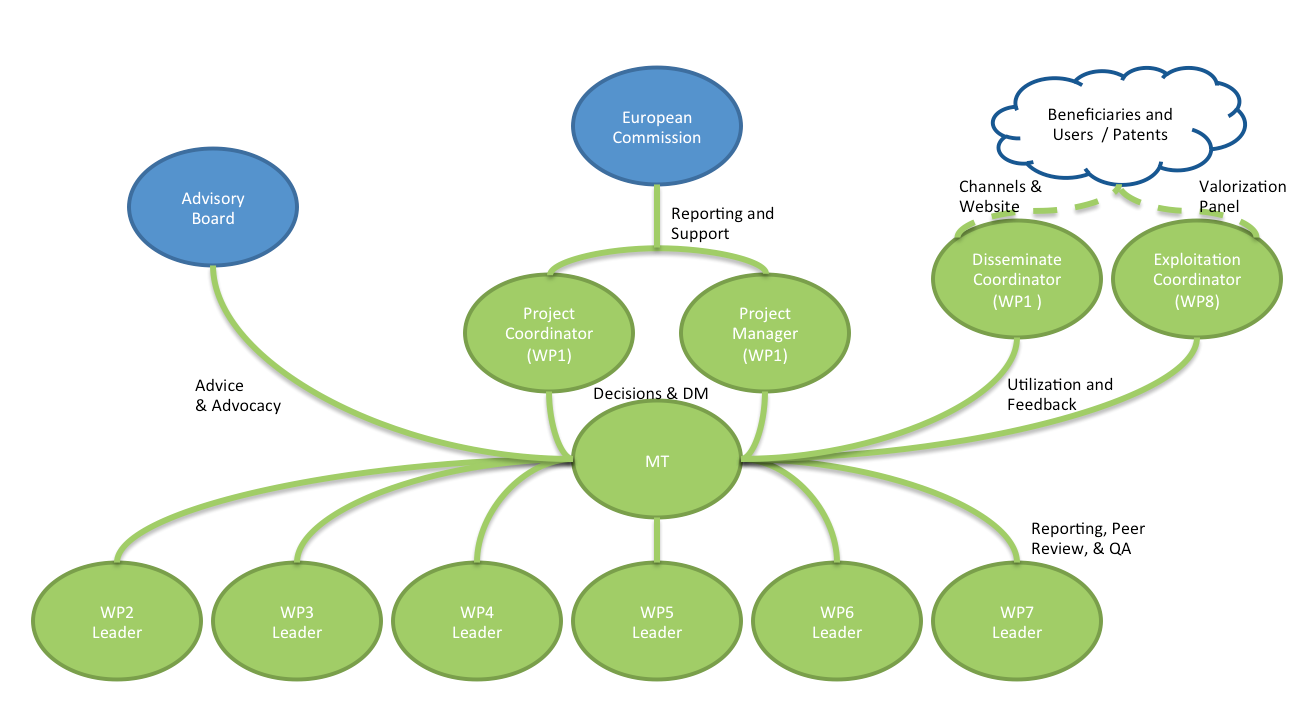 The consortium developed incrementally in the years prior to its4land kicking off. C All members of the its4land consortium share the common desire to see conflict minimization and promotion of sustainable livelihoods in East Africa, supported by the use of innovative geospatial technologies. This shared interest and pre-existing collaborative setup enabled effective proposal development, and successful completion of several proposal development workshops. The collaborative foundation provides a basis for successful management of the project. In order to efficiently manage the project, all project partners agreed on the management structure that we describe here.

The Project Coordinator is responsible for overall project implementation. They perform day-to-day management of the project, resolve conflicts, and monitor the progress of work with respect to the project plan. The PC is responsible for organising the Management Team (MT) meetings, plenary meetings and the EC review meetings. They are responsible for communication with the EC on behalf of the consortium, including the submission of project deliverables and administrative project reporting. In particular, the PC isresponsible for the following administrative tasks: ensuring the fulfilment of all project commitments from contractual point of view; monitoring the overall progress of the project and the timely forwarding of the deliverables to the EC; chairing major meetings, like plenary sessions, MT meetings, including preparation of agendas and minutes; ensuring efficient communication and co-operation between partners; preparation and execution of all communication with EC; distribution of project funds to the participants in accordance with the contract; collection of cost statements from all participants and respective financial documentation, preparation of summaries of cost statements for the entire consortium. Regarding the scientific management tasks, the PC has the obligations to: ensure an efficient and effective realisation of the work plan (e.g. revisions of the planning in order to not allow delays to compromise the overall timeline and objectives of the project); establish and apply procedures for quality control, regarding completion of deliverables; and ensure that all deliverables and communication towards the EC meet the objectives and are of high quality.

The project manager (PM) assists the project coordinator in managerial tasks such as reporting preparation, organising meetings, collection of cost statements. This PM also – in cooperation with the PC – deals with part of the communication. The PM will be a staff member from the administrative and financial department from UT. Those colleagues have a long standing experience in project management, with a historical emphasis on cooperation with developing countries.

The Management Team (MT) is the committee in the project with the highest decision making power. The MT is composed out of one representative per consortium member and will meet on request by the Project Coordinator, or when two consortium members ask for it. In addition, the Exploitation Coordinator can ask for a meeting. Meetings might be necessary in case of conflicts or when important decisions regarding major changes in the project planning need to be taken. Especially in the setup in this project, different cultural backgrounds and organizational norms, means the MT will play an important facilitative role in potential conflict situations. The MT also meets on a regular basis (every 6 weeks), particularly with regards to milestone accountability and deliverables. When consensus within the consortium on certain decisions cannot be reached, the MT is the committee that will be called upon to make resolutions. If need be, it reaches consensus through a majority vote.

The Advisory Board (AB) consists of stakeholders that do not form part of the project consortium. This might be cadastral agencies or companies from the geospatial sector from Europe, but also government institutions in the target countries in East Africa. The members of the AB were nominated in the first months of the project and one of the first deliverables (D1.2) reports about the final constellation. See here.

For administrative effectiveness, UT also takes a lead role in dissemination: they have cross-cutting involvement in the majority of WPs. They also maintain natural linkages with the majority of stakeholder groups in the EU and East Africa. They represent the project to the public and implements strategies devised in the exploitation and communication plans to maximize effectiveness in this regard.