Why: Get-together of Dutch developers, users, and managers of open-access geographic information systems (GIS) such as QGIS.

The objective was to network with people working on QGIS related (technical) issues and possibly with people working on (similar) plugin development as the one we are currently working on in its4land. During FOSS4GNL, Sophie met some (Q)GIS developers that will also attend the QGIS user and developer meeting in Nodebo, Denmark in august this yearm and exchanged contacts and received interest in her work by the one of the orgnizers of the event who invited her for a presentation for the FOSS4GNL next year. Furthermore, Sophie gained some insights in the new QGIS version (v.3), which will be released on 19. September 2017. The version is already available for downloading and testing before its release. 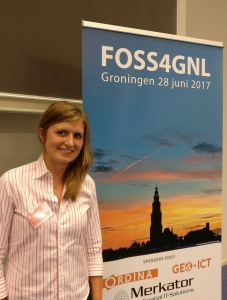 The processing toolbox will be updated to Python 3, which will require all plugins developed for QGIS v.2 to be (partly) adapted. Further, the processing times of different core modules should be reduced and the stability of the entire software improved. Also, manual delineation functionalities are revised towards making them more user-friendly. All this information is important for ongoing work on the QGIS plugin Sophie developed as part of her PhD work (BoundaryDelineation).