Why: A one day review corresponding to the first reporting period took place on Friday, April 21th, 2017, at The Leuven Institute for Ireland in Europe, in Leuven. During this workday the first year of project activities were analysed and commented. Specifically, the focus was on the second half of the year that was not under previous review. For the period under check and in accordance with the DoA, the project has produced 3 deliverables and reached 3 milestones, of which one is a periodic report to the EU. The other 2 deliverables are:

The overall assessment, taken from the EU Expert Report, was fairly positive: ‘Project has achieved most of its objectives and milestones for the period with some minor deviations’. The its4land project team will now work on implementing the recommendations defined in the Expert Report, to further improve the project’s performance. 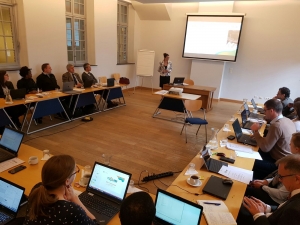