Its4land researchers from the Institute for Geoinformatics at the University of Muenster submited three deliverables on 31st July this year. The three deliverables D3.3 qualitative representation of sketch maps; D3.4 documentation of extended LADM; and D3.5 prototype for sketch map alignment are all part of the Smart Sketch Maps system (a.k.a. Smart SkeMa) being developed under Work Package 3 of its4land. All 3 deliverables are the result of many activities from primary data collection in the field in Kenya, to algorithm design, knowledge engineering, and software implementation.

Smart SkeMa is a sketch based geospatial data recording tool especially tailored to capturing land tenure data from a local perspective. In first and second quarter of the year 2017, WP3 carried out data collection activities in parallel to the tool development work.  Different workshops were organized during field visits to Kenya and Ethiopia and land use sketch maps were collected. These sketch maps have been used as information sources and test data in the development phases of different components in the Smart SkeMa system.

Over the past months the Smart SkeMa system has also been presented in different workshops and conferences: in March 2018 in a masterclass at the annual World Bank Conference on Land and Poverty held in Washington DC; in September/October 2018 at 3 separate workshops in Nairobi Kenya; and in October 2018, at the ISPRS Technical Commission IV symposium in Delft.

Below we give brief summaries of each of the deliverables D3.3, D3.4, and D3.5. Those interested in more detailed descriptions are encouraged to follow the links at the end of this article.

Deliverable D3.3 reports on the implementation of qualitative qualifier. The qualifier is a software tool that takes a vector representation of an input map (sketch or metric geo-referenced map) and generates a Qualitative Constraint Network (QCN). The QCNs and other information provide the basis for the alignment of hand drawn objects with corresponding objects in the metric map.  The qualifier consists of a set of python modules and classes that are categorized into library code, which provides the interface for implementing different kinds of qualifier types, and qualitative spatial representation code, which computes the actual representation for a specific spatial aspect.

Figure 1 shows the QCNs representing the LeftRight relations between spatial objects with respect to rivers in the input maps. For example, the river crosses marsh grass (marsh_1 and marsh_2) in both maps, while the Naganjoka hills and Kurket hills are on the left and right side of the river. These QCNs are used for the alignment of spatial objects in the input maps. 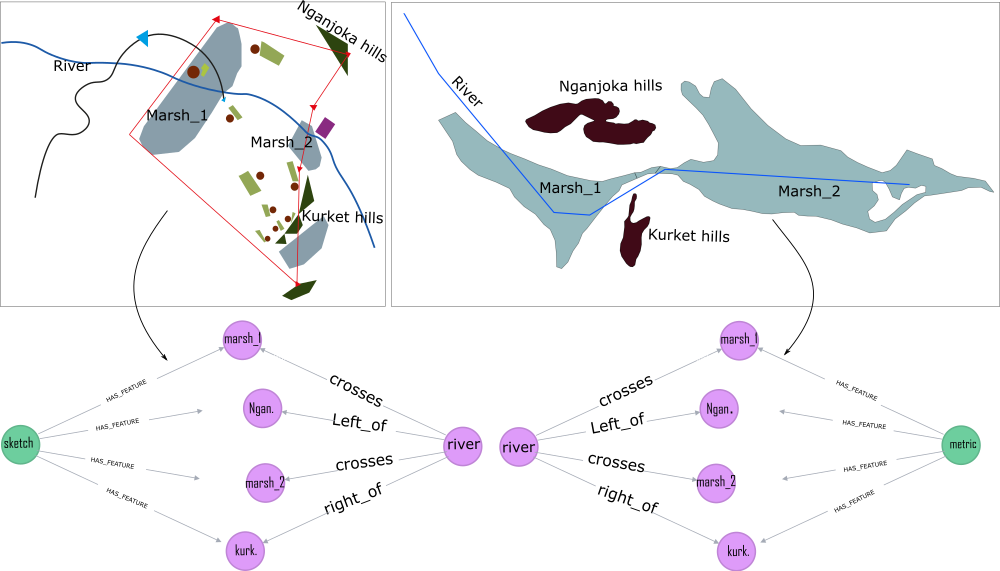 In deliverable D3.1, we developed the domain model: the MSKDM based on research conducted on the Kenya use case. This is currently being adapted to the Ethiopian Domain Model (EDM)   based on our work in Ethiopia. In order to integrate these local concepts with the existing standard LADM, we have developed an independent tool, which we call the “Adaptor Model”. The Adapter Model bridges the indigenous knowledge encoded in the MSKDM and EDM to the ISO 19152 LADM. The bridging then becomes an extension of the LADM.  Figure 2 illustrates how the local concepts in the MSKDM and EDM are integrated in a standard LADM. All domain models are encoded as owl hierarchies. Deliverable (D3.4) reports on Adapter Model developed to integrate local concepts. More details on the Adaptor Model can be found in the following publication: Karamesouti et. al. (2018) The Maasai of Southern Kenya Domain Model of Land Use (https://doi.org/10.5194/isprs-annals-IV-4-105-2018)

Figure 2. Conceptual integration of the domain models with LADM.

The alignment of spatial objects in a sketch map with corresponding objects in the metric map is achieved using graph matching algorithms. Two algorithms have been explored to this end. The first is a spectral graph matching algorithm which uses the principle eigenvector in the compatibility of the two input maps as a heuristic (Leordeanu and Hebert. 2005). The second uses the LCM heuristic of Chipofya et al. (2016) with a dynamic programming algorithm to establish as ordering among pairs in the compatibility matrix which is likely to produce a good matching. Both algorithms are evaluated for efficiency and solution quality. Deliverable D3.5 reports on the implemented algorithms for the alignment of spatial objects. Figure 3 illustrates the alignment of sketched objects with objects in the metric map using the QCNs with LeftRight relations. The alignment algorithm takes the QCNs as input and identifies possible matches.

Currently, we are preparing procedures and guidelines for using Smart SkeMa. We are improving the implementation of the web-based front to integrate all the components of the Smart SkeMa system. The web-interface will be used to demonstrate overall workflow of Smart SkeMa. This will enable us to engage potential users and get opportunities to test our tool in a real application context during our field visits and workshops.

The deliverables are accessibly through our website or directly at: